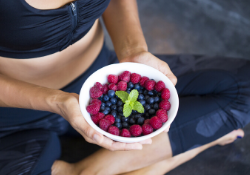 If you want to learn more about the S4 Antioxidant, I’m just going to briefly talk about it. There are nutrients in this supplement that are so powerful.

One of the main things here is astaxanthin. It’s an anti-inflammatory that stimulates the immune system and has anti-cancer effects on human cells. It also prevents oxidative damage to blood LDL cholesterol issues. So, just that one ingredient alone.

Angel’s hair is a Japanese seed plant that promotes healthy living and helps the body to fight disease. Remember, when you have patients on programs, what we’re trying to do is to transform their health and lifestyle habits, and help them slowly detoxify from all these toxins that they’ve ingested, from all this food that they’ve been eating over the years.

Ginkgo Biloba helps ease digestive problems and stomach complaints. Bilberry fruit acts as an antioxidant that purifies the blood and can be used as a diuretic. So again, we want to flush the system. We want to get those toxins out of our bodies as fast as possible. Milk thistle herb. Huge, important. It helps relieve the symptoms of hepatitis, cirrhosis, and inflammatory liver conditions.

You’ve probably heard of cirrhosis of the liver that was caused by alcoholism? Well, guess what. The number one cause of a fatty liver, cirrhosis, is dietary. It’s no longer alcohol. So dietary just beat em’. It’s one of the most effective herbs in also relieving liver disorders. One of the reasons why we’re doing a cleanse and detox is because your liver, you only have one of them. Your liver is like the filter of your body. So you want to have a great filter system to filter out the toxins of your body.

Selenium Chelate is an important mineral in antioxidant properties, and it’s important for protecting cells from the damage of free radicals. So again, it’s another nutrient that protects the body of what free radicals can actually do.

Motherwort encourages bile production, healthy digestion, and relieves gas pains. So bile production is really important, especially if you’re eating fats. Because the bile is being released through the gallbladder and emulsified and helps to digest or break down fats because we do need fats. We do need fats in our diet.

So just that, in and of itself, the S4 Antioxidant is a supplement you should be taking every day. No matter if you’re on a program, or not on a program.